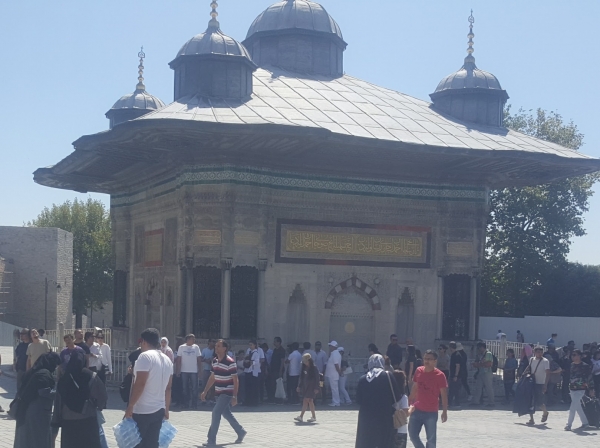 The city today known as Istanbul has been the site of human settlement for approximately three thousand years. Thracian tribes founded a settlement here; its earliest known name was Lygos. Greeks colonised the area and established the city of Byzantion in the 7th century BC. It fell to the Roman Republic in 196 BC, and was known as Byzantium in Latin until 330, when the city, soon renamed as Constantinople, became the new capital of the Roman Empire. During late antiquity, the city rose to be the largest in the western world, with a population peaking at close to half a million people. Constantinople functioned as the capital of the Byzantine Empire, which effectively ended with the fall of Constantinople in 1453. Constantinople then became the capital of the Ottoman Turks.

The population had declined during the medieval period, but as the Ottoman Empire approached its historical peak, the city grew to a population of close to 700,000 in the 16th century, once again ranking among the world's most populous cities. With the founding of the Republic of Turkey in 1923, that country's capital moved from Constantinople to Ankara . Since 1930 the native name "Istanbul" has been the sole official name of the city in Turkish and has since replaced the traditional name "Constantinople" in most western languages as well.

Prehistory
Humans have lived in the area now known as Istanbul since at least the Neolithic period. The earliest known settlement dates from 6700 BC, discovered in 2008, during the construction works of the Yenikapı subway station and the Marmaray tunnel at the historic peninsula on the European side.The first human settlement on the Anatolian side, the Fikirtepe mound, is from the Copper Age period, with artifacts dating from 5500 to 3500 BC. In nearby Kadıköy (Chalcedon) a port settlement dating back to the Phoenicians has been discovered.

Lygos
The first name of the city was Lygos according to Pliny the Elder in his historical accounts. It was founded by Thracian tribes, along with the neighbouring fishing village of Semistra.[9] Only a few walls and substructures belonging to Lygos have survived to date, near the Seraglio Point (Turkish: Sarayburnu), where the famous Topkapı Palace now stands. Lygos and Semistra were the only settlements on the European side of Istanbul. On the Asian side there was a Phoenician colony. On the site of Lygos, the later Byzantium was located, thus Lygos is accepted as the city which gave rise to Istanbul.

Byzantium
Main article: Byzantium
Byzantion (Βυζάντιον), Latinized as Byzantium, was the next name of the city. The name is believed to be of Thracian or Illyrian origin and thus predates the Greek settlement. It may be derived from a Thracian or Illyrian personal name, Byzas. Ancient Greek legend refers to a legendary king Byzas as the leader of the Megarian colonists and eponymous founder of the city. Cape Moda in Chalcedon was the first location which the Greek settlers from Megara chose to colonize in 685 BC, before colonizing Byzantion on the European side of the Bosphorus under the command of King Byzas in 667 BC. Byzantion was established on the site of an ancient port settlement named Lygos During the period of Byzantion, the Acropolis used to stand where the Topkapı Palace stands today.

After siding with Pescennius Niger against the victorious Septimius Severus the city was besieged by Rome and suffered extensive damage in AD 196. Byzantium was rebuilt by the Roman Emperor Septimius Severus and quickly regained its previous prosperity, being temporarily renamed as Augusta Antonina by the emperor, in honor of his son.

Late Roman period and the Eastern Roman (Byzantine) Empire
The location of Byzantium attracted Constantine the Great in 324 after a prophetic dream was said to have identified the location of the city; but the true reason behind this prophecy was probably Constantine's final victory over Licinius at the Battle of Chrysopolis (Üsküdar) on the Bosphorus, on 18 September 324, which ended the civil war between the Roman Co-Emperors, and brought an end to the final vestiges of the Tetrarchy system, during which Nicomedia (present-day İzmit, 100 km east of Istanbul) was the most senior Roman capital city. Byzantium (now renamed as Nova Roma which eventually became Constantinopolis, i.e. The City of Constantine) was officially proclaimed the new capital of the Roman Empire in 330. At the end of his reign in 337, Constantine declared his three sons as joint heirs of the Roman Empire in a system of co-emperorship. However, the sons couldn't govern together peacefully and their military rivalry split the empire on the north-south line along the Balkan Peninsula. The territory was officially split in 395 when Theodosius I (ruled, 379-395) died, leaving his son Honorius emperor of the western half, and his other son Arcadius emperor of the eastern half of the empire.

Constantinople became the capital of the Eastern Roman (Byzantine) Empire. The combination of imperial power and a key location at the crossing point between the continents of Europe and Asia, and later Africa and other regions, played an important role in terms of commerce, culture, diplomacy, and strategy. It was the center of the Greek world and, for most of the Byzantine period, the largest city in Europe. Constantine's conversion to Christianity, in 312, had set the Roman Empire towards Christianization, and in 381, during the reign of Theodosius I, the official state religion of the Roman Empire became Christianity, turning Constantinople into a thriving religious center.

Throughout the fifth century, the western half of the Roman Empire lost most of its power through a decline in political, economic, and social situations, the last western emperor being deposed by Germanic mercenaries in AD 476; the eastern half, however, was flourishing. According to historians this flourishing Eastern Roman Empire was then classified as the Byzantine Empire to distinguish it from the Roman Empire. This empire was distinctly Greek in culture, and became the centre of Greek Orthodox Christianity after an earlier split with Rome, and was adorned with many magnificent churches, including Hagia Sophia, once the world's largest cathedral. The seat of the Patriarch of Constantinople, spiritual leader of the Eastern Orthodox Church, remains.

The most famous Byzantine emperor was Justinian (527-565). During his reign, he extended the Byzantine Empire to its largest boundaries spreading from Palestine to the tip of Spain. His other achievements include the famous Hagia Sophia church and the organized law system called the Codex which was completed in 534. However, Justinian's reign was the greatest influence of the Byzantine Empire.

Starting in the 600s, warfare kept Constantinople's power flip-flopping between decline and progression. Alliance with Europe slowly began to break away from the Byzantine Empire between the seventh-eighth centuries, when the Byzantine and Roman churches disagreed on various subjects. However, the distinguishing gap placed between the two churches involved the use of icons in the church. Icons, being images of Christian holy people such as Jesus Christ, the Virgin Mary, and the saints, to Byzantine Christians were more than representations; they were believed to possess holy power that affected people's daily lives While many Byzantines worshiped icons many opposed the icons because they tested the authorities of the emperor. Finally, in 726 Emperor Leo III (ruled, 717-741) ordered all icons to be destroyed. The destruction of icons reorganized and reoriented the Byzantine rulers in imperial power. The fierce opposition to icons clashed with the pope's tolerance of images. The papacy was unwilling to permit sacred images and icons to be destroyed and this caused an eventual separation. Their separation caused hatred between the two churches and cooperation between the two was a struggle.

From around the 9th to 13th centuries, Constantinople developed complex relationships with an emerging and later the largest and most advanced state of that time in Europe - Kiev Rus. Constantinople played a significant role in the Kiev Rus development, culture, and politics. Many of the Kiev Princes were married to daughters of the Byzantine Emperors, and because of this connection, Eastern Europe became Orthodox after it was Christianized by Vladimir the Great of Kiev. However, these relationships were not always friendly - Constantinople was sacked several times over those 400 years by Kiev Princes, forcing Constantinople to sign increasingly favorable treaties for Kiev, the texts of which were preserved in the Primary Chronicle and other historical documents (see Rus'-Byzantine Wars). Byzantine constantly played Kiev, Poland, Bulgaria, and other European Nations of that time, against each other.

Near 1204, Constantinople began to decline in power. Because of the failure of the Third Crusade, self-confident western Europeans decided to again try to capture the Holy City of Jerusalem in the Fourth Crusade; but this time their plan was to capture the Byzantine Empire as well. In 1204, western armies captured Constantinople and ransacked the city for treasures.[18] The pope decried the sacking of Constantinople but ordered the crusaders to consolidate their gains in the city for a year. The crusaders chose Baldwin of Flanders to be the new Byzantine Emperor; he along with other princes and the Venetians divided the Empire amongst themselves; they never made it to Jerusalem.[18] This new Latin Empire at Constantinople lasted until 1261 when the Byzantines under the command of Michael VIII Palaeologus recaptured the city and some outlying territory.[18] After this, Constantinople never regained its former glory. Rather than a thriving metropolis, Constantinople transformed into a collection of villages, and became a semi-ghost town with, as Ibn Battuta noted, sown fields within the city walls. The city by 1453 held less than a tenth of its former population.